Daily Readings & Thought for September 27th. “THOSE WHO DENY THAT …” 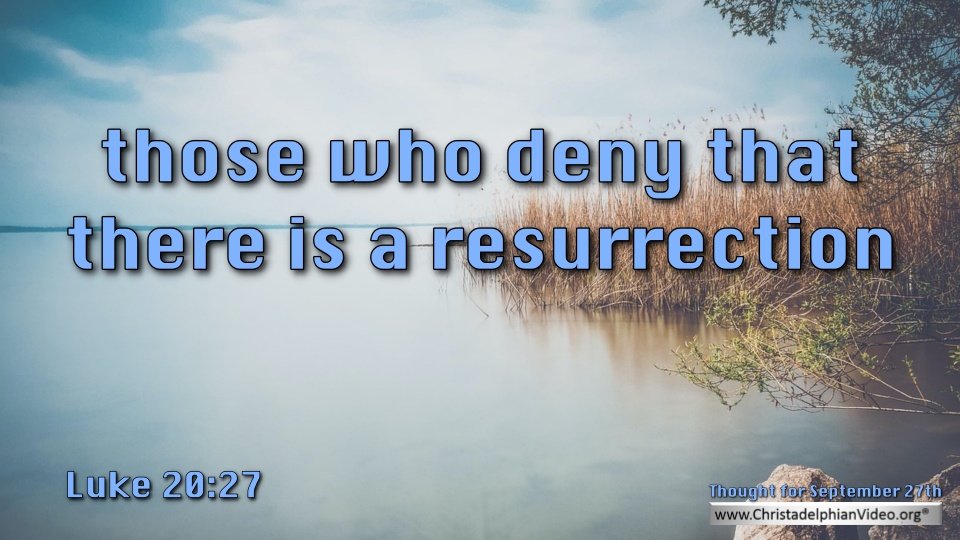 We have 3 chapters today that teach valuable lessons.  1 Chron. Ch. 10 tells us that “Saul died for his breach of faith.  He broke faith with the LORD …” [v.13] in not keeping his commandments, a lesson for all those who have committed themselves to serve the LORD.

“The word of the LORD came to me “ says Ezekiel [23 v,1] and he receives a parable that pictures God’s disgust at the spiritual adultery of the nation.  The LORD says to them, “Because you have forgotten me and cast me behind your back you yourself must bear the consequences  … “  [v.35]  And what consequences does today’s world face for doing this!?

In our chapter in Luke (20) we see how “there came to him (Jesus) … those who deny that there is a resurrection” [v,27] as yet another example of those who believe what they want to believe and serve God on their own terms as Saul and nearly all the people in Ezekiel’s day had done.  We note how Jesus responded to these deniers with a declaration of what is true, he “said to them, ‘The sons of this age marry and are given in marriage, but those who are considered worthy to attain to that age and to the resurrection from the dead neither marry nor are given in marriage, for they cannot die anymore because they are equal to the angels and are sons of God being sons (and daughters Footnote) of the resurrection” [v.36]

Jesus then says (v.37) that even the writings of “Moses showed (this), in the passage about the burning bush, where he calls the Lord the God of Abraham and the God of Isaac and the God of Jacob” [see Exod 3 v.6].  God was not proclaiming himself to be the God of the dead who have gone into oblivion for ever.

. God transcends time, he is from everlasting to everlasting; the prayer/Psalm of Moses states this, “Before the mountains were brought forth, or ever you had formed the earth and the world, from everlasting to everlasting you are God.” [Psa. 90 v.2]   Oh, how incredible is the wonder of knowing and having a real everlasting relationship with God!  Saul failed, the people of Israel’s time failed, the Sadducees failed, it seems nearly everyone today is failing – make sure you do not fail; feeding your mind of God’s word every day is an essential ingredient.