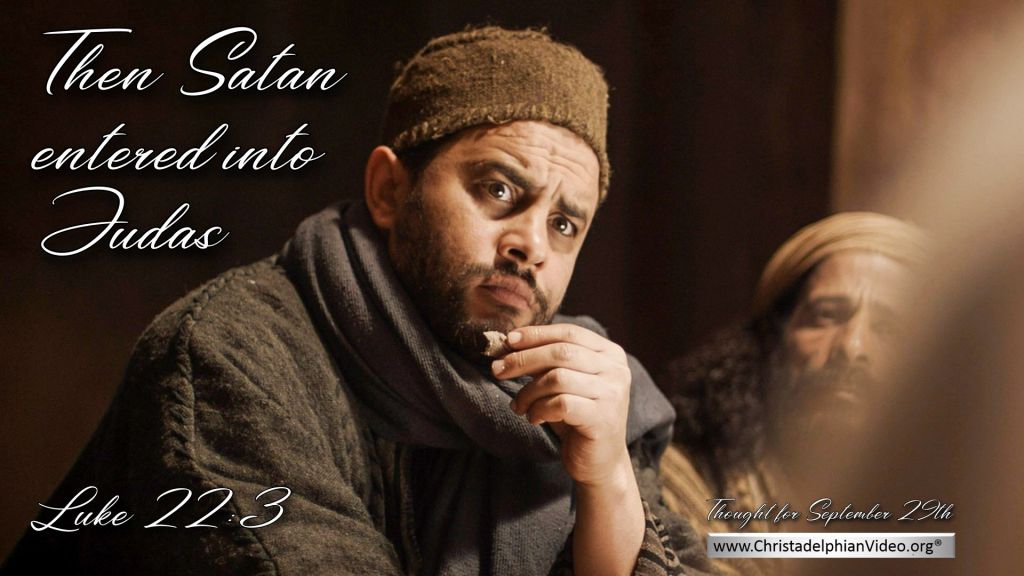 Today, in Luke ch 22, we read of the arrest of Jesus.  Before this he and the disciples had a Passover meal of the bread and the wine: it would only be later the disciples would see the wonder of all their Master said on that occasion and remember his words, “Do this in remembrance of me.” [v.17] and learn the lesson to be like him in being “as one who serves.” [v.27]  The reward for their service would come when they “eat and drink at my table in my kingdom and sit on thrones judging the twelve tribes of Israel.” [v.30]

There is a certain mystery early in our chapter, when it states, “Then Satan entered into Judas” [v.3]. This increases when Jesus later says to Peter, “Simon, Simon, behold Satan has demanded to have you, that he might sift you like wheat, but I have prayed for you that your faith many not fail.” [v.31,32]  What does Jesus mean by Satan?  On one occasion Jesus rebuked Peter telling him, ‘Get behind me, Satan! For you are not setting your mind on the things of God’ [Mark 8 v.33]  In today’s chapter Peter 3 times denies knowing his Master, he had not heeded his Master’s advice on the Mount of Olives when he told the disciples to “pray that you may not enter into temptation” [v.40]  In the verses that follow we read how Jesus is surrounded by satans, led by Judas Iscariot.

What is the cause of temptation?   The word ‘satan’ personifies negative human feelings, leading one to think in ungodly ways.  Judas was so dominated by thoughts of the benefits money was bringing him that he was ready to make more money by betraying his Master, believing, we conclude, that Jesus would escape from trouble as he had seen him do in the past – recall what we read in Luke 4 v. 28-30.

Paul tells the Romans how “sin came alive” in his mind, so that “I died.”  He admits, reflecting back on his life, “I do not understand my own actions … I do the very thing I hate … I have the desire to do what is right, but not the ability to carry it out …  ” [Romans 7 v.9,15,18] But in his next chapter he tells the Romans how he learnt “to set the mind on the Spirit” and this brought “life and peace.”  [v.4-6] Paul does not use the word “Satan” in Romans until the very end – and then he means a literal enemy as Judas became. “The God of peace will soon crush Satan under your feet.” [16 v.20] That will happen soon to our world!

Turning back to Luke 20 we see how Jesus takes his disciples, “as was his custom, to the Mount of Olives … And when he came there he said the words we quoted earlier, ‘Pray that you may not enter into temptation.’ [v.39,30]  Let us make that our prayer too for our world is full of satans whose minds are set on the very opposite to the things of God.