Thought for October 14th. “THIS IS TRULY THE PROPHET” 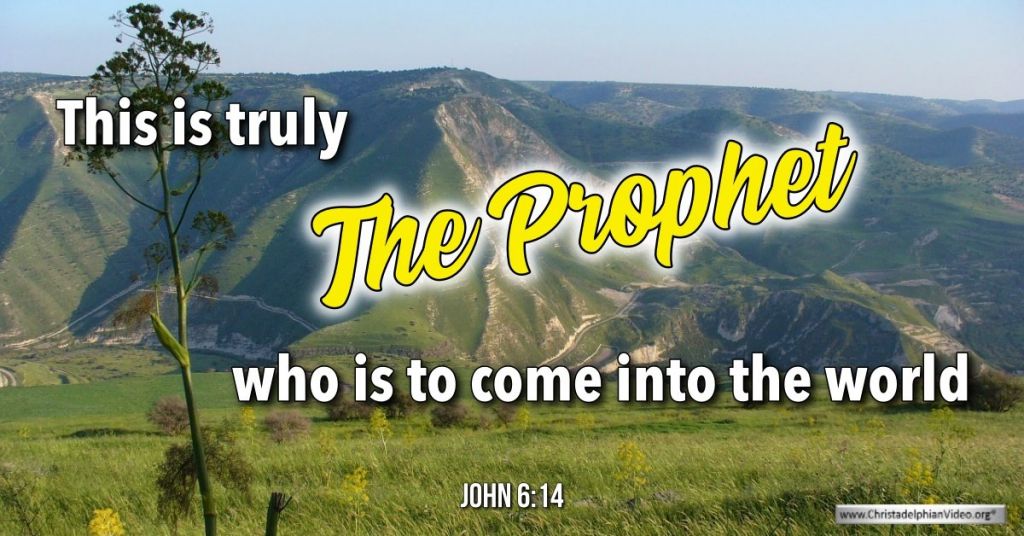 Our readings in John [Ch.6] tell us of when thousands of people personally experienced a great miracle, it is the one miracle recorded in all four gospels; it is when Jesus miraculously fed thousands of people.  It is interesting how people can see miracles, such as healings, even a dead man raised, things that happen to other people, but when they personally experience something completely miraculous, it makes a greater impression.
The text says that “when they had seen this sign” they said, “This is truly the prophet who is to come into the world” [v.14] But what happened next!! They then “were about to come and take him by force and make him King” [v.15].  What did Jesus do?
“He departed again to a mountain by himself alone”   Why did he do this?  He was, in effect, running away from them.   Remember that one of the temptations in the wilderness was also an invitation to Him to take rulership over all the kingdoms of the world [Matt. 4 v.8-9].  He was to answer Pilate’s question, “So you are a king?” by saying, “For this purpose I was born and for this purpose I have come into the world” [John 18 v.37]
What a temptation for him to respond and to be immediately proclaimed king.  His Father had given him unlimited power [John 3:34], so he could immediately bring total justice, etc into the world.  But this would be doing the right thing the wrong way!   That is one of the more subtle and dangerous temptations we have in life.
Those who think Jesus is God himself cannot comprehend how Jesus was really tempted; but it says in Hebrews that our High Priest (Jesus) was “one who in every respect has been tempted as we are” [4 v.15]  The Apostle Paul despite all his dedication in serving Christ admits, “I see in my members another law waging war against the law of my mind and making me captive to the law of sin that dwells in my members” [Romans 7 v.23]   It is evident Jesus was tempted in the same way, but “the law of sin” never won. Instead he won and, as a result was “made perfect” {Hebrews 5 v.9]
Matthew’s account of his temptation in the wilderness was known to him most probably by being told of it by Jesus, and Jesus chose to describe his inner temptation in the form of a parable.  So let us try to follow the example of Jesus and try to run away from temptation by doing something else, thinking of something else, or by calling a Bible passage to mind as Jesus did in the wilderness temptations, then we will be truly followers of “the prophet”.