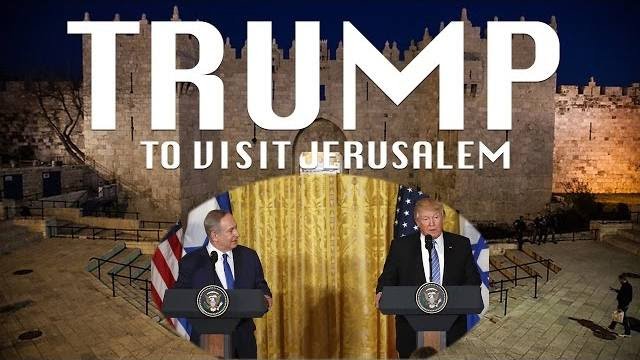 Print
May 1, 2017 – Audio, 6.32 MIN
(Links at bottom of page to download free viewers.)
President Donald Trump is set to visit Jerusalem a day before Jerusalem day and the 50th anniversary of the reunification of the city. Trump is reported to be scheduled to arrive on May 22 and leave on May 23. Jerusalem Day is celebrated in Israel this year beginning at sundown on May 23 until sundown on May 24.

“After much speculation surrounding the precise date, White House marks May 22 for President Trump’s first official visit to Israel, where he will stay for one night; Secretary of State Tillerson will accompany the president, along with UN Envoy Nikki Haley, a staunch Israel supporter, and Ambassador to Israel David Friedman.”

There is speculation as to whether Trump may announce moving the American Embassy to Jerusalem on this trip. There is also a report that claims Trump will recognize all of Jerusalem as the capital of Israel. Time will tell! Without question however, Trump’s entourage has to be one of the most pro-Israel ever and certainly more so that the last administration’s.

This was the headline on Arutz Sheva, the story also reported by Ynet News. Israel is planning building 25,000 new homes in Jerusalem, including 15,000 more homes in East Jerusalem, in areas liberated during the 6-day war 50 years ago, including Pisgat Zeev and Gilo.

Not only is this May/June celebrating 50 years since the liberation of Jerusalem during the 6-day war, this coming November 2, marks 100 years since the issuing of the Balfour Declaration by the British government and December is 100 years since the liberation of Jerusalem by the British from the Ottoman, Turkish Empire. Israel’s biblical calendar was divided into periods of sevens. Every seven days was the Sabbath day, every seven years was a sabbatical year when debts were forgiven and every 7 sabbatical cycles (49 years) was the great year of jubilee when every man was free to return to his land of inheritance. These were the milestones of Israel’s national life under God’s law. I considered this last year on Bible in the News: http://www.bibleinthenews.com/Podcasts/519

The jubilee was announced by a great trumpet blast throughout the land of Israel. It was a time of redemption, liberty, returning to the land of inheritance and to families. It was related to the day of atonement and so to forgiveness and the renewal of the covenant. It was therefore also connected to solemn worship, while being a time of great rejoicing. It was also a time of travel up to Jerusalem, for the feast of tabernacles. Isaiah 27:13 prophesies of a great Jubilee trumpet being blown, “And it shall come to pass in that day, that the great trumpet shall be blown, and they shall come which were ready to perish in the land of Assyria, and the outcasts in the land of Egypt, and shall worship the Lord in the holy mount at Jerusalem.”

Since I considered the Jubilee last year on Bible in the News, I noticed another prophecy that is divided into Jubilee periods. This prophecy is the prophecy of 70 weeks in Daniel 9. This prophecy foretold the time from the command to rebuild and restore Jerusalem until Messiah the Prince. 70 weeks is 490 days, which prophetically based on a prophetic day for a year is 490 years. This is 10 Jubilee periods. Another example of this principle was when Israel had to wander 40 years in the wilderness based on the 40 days the spies had searched the land, each day for a year (Numbers 14:34). Again, when Ezekiel had to lay on his side for the iniquity of Israel and Judah, he was appointed “each day for a year”. It would not have been possible for Ezekiel to lay on one side for 390 years on one side and 40 years on his other side. So Yahweh condensed the time to a length suitable to the symbology.

The 70 weeks are broken down in Daniel’s prophecy into periods of 7 weeks, 62 weeks and 1 week. The first period is 7 weeks, or 49 years, from the commandment to restore and to build Jerusalem. This command went out in in 457 BC, in the 7th year of the reign of Artaxerxes (Ezra 7:8, 12-26). So, during the first return to the land at the time of Ezra and Nehemiah there was a Jubilee period, which marked the commencement and completion of the work. A further 9 Jubilee periods marked the completion of the work listed in Daniel 9:24.

During the first restoration and return to the land under Ezra and Nehemiah, events were measured by the 70 week prophecy according to Israel’s 7 year calendar cycle, including the Jubilee year. So during the great restoration which leads up to the establishment of the kingdom of God in Israel, it would seem fitting too, that the Jubilee period would be used.

In 1917 Britain issued the Balfour declaration — an issuing of a government policy to pursue the endeavour to create a national home of the Jewish people in the land of Israel — a policy in some ways similar to that of Artaxerxes. 49-50 years later in 1967 Israel took possession of all of Jerusalem and the mountains of Israel, the area known as the West Bank.

We are now in 2017, another ‘Jubilee period’ on. The government in Israel is getting ready to move ahead with a massive building spree in Jerusalem and the Prime Minister of the United States is about to make a visit to the land of Israel. All eyes will be watching Israel and Jerusalem to see what greater events may develop.

Events continue to move forward at a rapid pace and we will be watching with excitement and interest as they unfold. This has been David Billington with you, return next week as we once again consider the Bible in the News at www.bibleinthenews.com