Western Civilisation in Chaos – Bible in the News

For more audio like this and to visit the back catalogue visit http://www.bibleinthenews.com/Podcasts
Western Civilisation in Chaos
An article in The Jerusalem Post declares “The end-game has begun. America’s nightmare presidential election has entered its final agonizing throes… No one can predict this election result even now.”

Print
October 16, 2016 – Audio, 6.45 MIN
(Links at bottom of page to download free viewers.)
The writer, Melanie Phillips, says that the Republican candidate for the Presidency has turned out to be “a crude sexual barbarian” while the Democratic candidate has used threats in order to silence women who had been “used” to satisfy Bill Clinton’s “sexual excesses” when he was president. Phillips, a well-known journalist says:
“The issue in this election is not which candidate has the better claim to be an admirable human being or indeed a fine president. The issue, unfortunately, is which of the two presents the greatest danger to America and, by extension, to Israel and the rest of the free world. Either way, America’s fate hangs in the balance. We can only look on aghast.”

While the free-world holds its breath the Russians are sending their warships round Britain and once again testing the response – and it may be noted that if Russia decided to push towards war with the US as some commentators are suggesting they are, Britain would be in the front line of any action. Further, the issue of Brexit could well see Europe fall into the hands of Vladimir Putin. And then there are all those refugees challenging Europe’s borders – waves of them coming from the Middle East and North Africa. Meanwhile Western civilization continues to embrace the fantasy of an enduring peace. 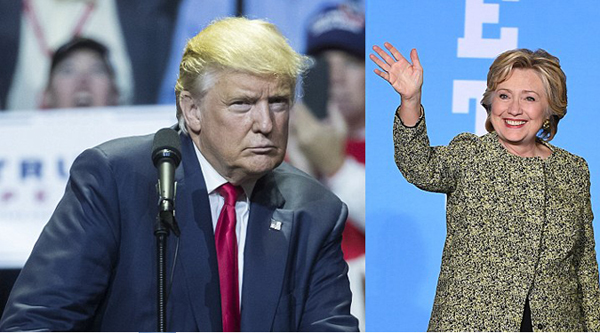 America’s choice – “The basest of men”

We are seeing the denial of reality: Post-Modernism in the dangerous nuclear world, as the basest of men (Daniel 4:17) and a drug-fueled woman seeks to gain the reins of power. This, surely, is “the spirits of devils” or demons (Rev. 16:14) whose mission is to gather the nations “to the battle of that great day of God Almighty” (16:14).

And, indeed, we see the issue of Israeli historic connection to Jerusalem (and to the Temple Mount area in particular) being held in question. This again is the denial of historic fact, as reported in the Jerusalem Post, October 2016.

UNESCO, that is the ‘United Nations education, Science and Cultural Organisation’ has made a fool of itself by denying the connection between the Jewish people, the Temple Mount and the Western Wall. Commenting on this Israel’s Prime Minster said:

“Today the organization took yet another hallucinatory decision that says that the people of Israel have not connection to the Temple Mount or to the Western Wall. Forget about asking if they have read the Bible. I suggest that UNESCO member visit the Arch of Titus in Rome. There you can see what the Romans brought to Rome after they destroyed and looted the Temple which stood on the Temple Mount 2,000 years ago. Engraved in the Arch of Titus you can see the seven-branched Menorah, which was and remains a symbol of the Jewish people and is also a symbol of today’s Jewish state. Soon UNESCO will say that the Emperor Titus was in the business of Zionist propaganda.

So, absurd though it may be to deny the Jewish connections, the fact is that once again the Bible is in the news.

We could take it further by pointing out the prophecy of Ezekiel chapter 35 and 36 where the nations are said to have a “perpetual hatred” against the mountains of Israel (see chapter 35:5 and verse 10, 11. Then there is chapter 36:2).

“Thus saith the Lord GOD; Because the enemy hath said against you, Aha, even the ancient high places are ours in possession.”

This has been the situation since 1967 when the Arab authorities were given control of the Temple Mount. A few years ago we heard an address by the leading Israeli archaeologist Gavriel Barkai in which he pointed out the movement for “Temple  Denial.” This has since grown so that now it  is taken up as fact by UNESCO. The address by Barkai was translated from Hebrew and appeared in the Bible Magazine Vol. 23, issue No. 2, page 24.

It is no wonder that Western Civilization is in chaos when we see the foolishness of modern philosophy replacing the obvious facts of history and archaeology. So it is that the spirit of madness is now going to elect a new leader of the United States who will have control over some of the most deadly and powerful weapons ever known to man.

Our prayer is: “Thy kingdom come…” It is the world’s only Hope.

This had been Paul Billington bringing you this week’s Bible in the News.