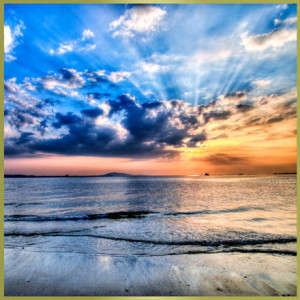 The theistic evolutionists suggest that Genesis 1 gives a transcendent description of God but in Genesis 2 we have a more anthropomorphic depiction (human characteristics applied to God), and that this is good evidence for Genesis 1 and 2 representing two differing stories.

Proponents of this view assert the description of God’s method of creating as evidence for this. In Genesis 1 God speaks, and it is done. In Genesis 2 God forms, breathes and plants, which, it is suggested, are all human based concepts. But this is a very poor argument, and careful reading reveals that God’s activity is also described in anthropomorphic terms in chapter 1, where He “called,” “saw,” and “rested” (1:8,12; 2:1).

In Genesis 1 God is described as “Elohim”, whereas in chapter 2 He is “Yahweh Elohim”. This is claimed to be yet another indication that the two accounts should be viewed as being different, perhaps with different authors. But this is mere assumption and the argument is unconvincing. In scripture differences in the Divine name and titles are placed in the text for a purpose:

6 “The pronoun ‘them’ is printed in italics as the translators’ indication that there is no comparable word at this place in the Hebrew text….It would have been a tremendous task within such a short compass of time, for Adam to inspect and name every one of the various forms of animal life that had been brought into being; and the Hebrew does not require it. If the pronoun “them” is eliminated (as the Hebrew text would permit), the reading would suggest that only certain species were brought before Adam… This does not mean that the animals were paraded before Adam to ascertain from among their number as to whether there was a “help fit for him”, but rather, at the conclusion of the inspection, there was a sense of loneliness as far as Adam was concerned” Christadelphian Expositor, Genesis 2:19-20, H P Mansfield, Page 67.

7 “The time when this took place must have been the sixth day, on which, according to chap. i. 27, the man and woman were created: and there is no difficulty in this, since it would not have required much time to bring the animals to Adam to see what he would call them, as the animals of paradise are all we have to think of”. Genesis, Commentary on the Old Testament, C F Keil & F Delitzsch, Vol. 1, Page 87.

8 “Is it necessary to assume that the angels led to Adam all the enormous variety of creatures already made? A wide and diverse selection, those living in the garden, would surely suffice to demonstrate to Adam’s high intelligence (no Neanderthal low-brow!) that amidst them all he was really alone (apart from his occasional fellowship with the angels). The animals learned that Adam was their master, made to have dominion (Ps 8:6), and in turn he was impressed with their essential inferiority. Thus, one of Adam’s first school subjects (though not the first) was zoology”. Genesis 1-4, Harry Whittaker, Page 71.

It is quite a leap in logic to assume that the use of “Elohim” in Genesis 1, and “Yahweh Elohim” in Genesis 2, indicates that the chapters have different authors, or tell different stories. If we are indeed dealing with the word of God then we must conclude that God may have chosen a different style deliberately, for a purpose. Genesis 1 is a more holistic description of the complete creation, and so it is reasonable that the might of God’s creative power should be emphasised. Genesis 2 introduces man, the pinnacle of God’s creation, and the only creature capable of displaying and manifesting God’s glory. It is therefore appropriate that in Genesis 2 the memorial name of Yahweh should be used.

It is by the proponents of theistic evolution that Genesis 1 and 2 give two different stories and contradictory statements regarding the creation of man. Genesis 1:27 says that “God created man in his own image, in the image of God created he him; male and female created he them”, whereas Genesis 2:7 states that “the LORD God formed man of the dust of the ground, and breathed into his nostrils the breath of life; and man became a living soul”. Whilst it is true that there is a difference in the description of the way man is created, we submit that the two descriptions are not at all contradictory. Genesis 1 describes how that man was made like the Elohim, whereas Genesis 2 gives us some of the details of how man was created.

Having examined the key arguments we believe that the idea that Genesis 1 and 2 are two different accounts is flawed, and has to be read into the text. Simply on the authority of the Lord Jesus Christ’s usage of Genesis 1 and 2 in Matthew 19, and on the apostle Paul’s usage in 1 Corinthians 11, we must see Genesis 1 and 2 as the same account, speaking of the same events at the same time period. They are historical and literal accounts, and we can and must believe and trust them. We have a choice – to believe in God’s inspired word, or to seek to undermine this by trusting in the ideas and opinions of man: “Trust in the LORD with all thine heart; and lean not unto thine own understanding” (Proverbs 3:5)