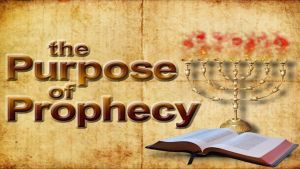 Example. The promises to David are quoted with reference to Solomon;    compare

Some Bible prophecies are fulfilled completely initially but this fulfilment is typical of something greater to come.

Example. Isaiah 17 was fulfilled in the Assyrian invasion in Hezekiah’s time, culminat- ing in the destruction of the Assyrian host (v. 14). Yet this fulfilment is also typical of the host which invades the land at the time of Christ’s return, and is destroyed.

Other examples. Jeremiah 50 and 51 are prophetic of the overthrow of the kingdom of Babylon, but the extensive use of the language of these chapters in Revelation 17 and 18 shows that this overthrow was typical of the overthrow of spiritual Babylon at Christ’s return. Psalm 41 (not strictly prophecy) is about David’s experiences in the revolt of Absalom, but his betrayal by Ahithophel is typical of Judas’s betrayal of Christ (v. 9, quoted in John  13:18).

3      Prophecies fulfilled on a number of  occasions

Some Bible prophecies are fulfilled on several occasions because of situations which keep occurring.