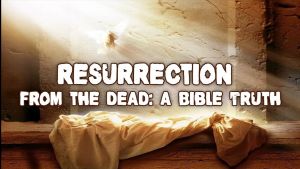 THE RESURRECTION OF JESUS CHRIST

The Apostle Paul wrote to the Corinthians: “if Christ be not risen, then is our preaching vain, and your faith is also vain” (1 Cor. 15:14). This shows the central place which the resurrection of Jesus Christ has in the gospel message of salvation, the gospel which Paul says, “I preached unto you, which also ye have received, and wherein ye stand; by which also ye are saved” (vv. 1,2).

Objections to the resurrection

There are many references in Scripture to the resurrection of Jesus Christ, and each Gospel contains detailed accounts of his appearances to people after his resurrection. Attempts have been made to dismiss the truth of these accounts on a number of different grounds:

To deny that Jesus Christ rose bodily from the dead is to deny that the Scriptures are the Word of God, so clear and detailed are they on the matter. In any case, these efforts to deny that the resurrection really happened do not make sense for a number of reasons:

The Apostle Paul refers in 1 Corinthians 15:5-8 to the many witnesses there were to the resurrection of Jesus:

In Acts 1 we read that Jesus “shewed himself alive” to his apostles “by many infallible proofs” (v. 3), and that the eleven apostles, in choosing a successor to Judas Iscariot, were mindful of the need to chose one who had been a follower of Jesus in his ministry and who could be “a witness with us of his resurrection” (vv. 21,22). In their preaching the apostles attested to the fact that Jesus Christ had indeed risen from the dead. Peter, preaching to

the Jews on the day of Pentecost, said: “This Jesus hath God raised up, whereof we all are witnesses” (2:32). It is recorded later that “with great power gave the apostles witness of the resurrection of the Lord Jesus” (4:33).

The importance of the resurrection of Jesus Christ

The resurrection of Jesus Christ is a key element in God’s plan for the earth. The following is a selection of passages in which the significance of his resurrection is brought out:

This leaflet is produced by The Testimony Magazine, 26 Tiercel Avenue, Norwich NR7 8JN,  to encourage personal and ecclesial study of Bible principles. Further copying for   distribution is encouraged.