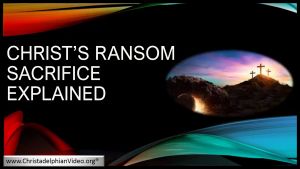 The idea of sacrifice is found throughout the Bible from its beginning to its end. God clothed Adam and Eve to cover their nakedness with coats of skins (Gen. 3:21). This indicates animal sacrifice. In the Book of Revelation, the saints sing their grateful thanks for the sacrifice of Christ: “for thou wast slain, and hast redeemed us to God by thy blood out of every kindred, and tongue, and people, and nation” (5:9). In the Letter to the Hebrews we are told that the sacrifices offered before Christ came were foreshadowings of his perfect sacrifice. Those sacrifices were “a figure for the time then present”; “the patterns of things in the heavens”; “a shadow of good things to come” (9:9,23;  10:1).

All the acceptable sacrifices offered both before and during the time of the Mosaic (Old) Covenant pointed forwards to the Lord Jesus Christ’s   offering.

The reason for sacrifice

The simple principle stated in Hebrews 9:22, “without shedding of blood is no remission”, tells us why sacrifice is necessary. Man has sinned, and the forfeiting of life shows man what sin deserves. In Leviticus 17:11, amply confirmed by biological science, we are told that “the life  of the flesh is in the blood: and I have given it to you upon the altar to make an atonement for your souls”.

What was special about the shedding of the blood of Christ and the offering of his body?

“for all have sinned, and come short of the glory of God; being justified freely by His grace through the redemption that is in Christ Jesus: whom God hath set forth to be a propitiation through faith in his blood, to declare His righteousness for the remission of sins that are past, through the forbearance of God; to declare, I say, at this time His righteousness: that He might be just, and the justifier of him which believeth in Jesus” (Rom. 3:23-26);

“For what the law could not do, in that it was weak through the flesh, God sending His own Son in the likeness of sinful flesh, and for sin, condemned sin in the flesh” (8:3).

The first passage brings to the fore the fact that Christ’s sacrifice declared the righteousness of God. This is repeated to underline its importance, along with the other feature, the grace and forbearance of God. The second passage tells us that Jesus “condemned sin in the flesh”, something that the sacrifices under the Law, and at other times, could not do.

These passages help us to understand how God could reconcile sinful man to Himself without jettisoning His principles of righteousness and   justice.

God was able to raise Jesus from the dead because he did no sin. He did not earn sin’s wages, but only inherited the sin and death principle by his descent from Adam. Biological science again confirms that death is programmed into our human   DNA.

For the sacrifice of Christ to be acceptable, Jesus had to live a sinless life. This was shown, for example, in the following:

“God’s method for the return of sinful man required the putting to death of man’s condemned and evil nature in a representative man of spotless character whom He would provide, to declare and uphold His righteousness, as the first condition of restoration, that He might be just while justifying the unjust, who should believingly approach Him in humility, repentance and confession (Rom. 3:24-6; 8:3; Heb. 2:14-15; Rom.   5:21)”.

This statement (by Brother Robert Roberts) is an excellent summary, and explains also why other sacrifices would be in vain. In the case of unblemished animals, physical perfection was a shadowy way of pointing to the sinlessness required in the ‘substance’ to come. In fact animals have nothing to do with man’s weakness and sin, cannot be tempted as we are, and  so cannot take away sin. Hence Jesus’ sacrifice pleased God more than the sacrifice of oxen (Heb. 9:12-14; 10:4-9; Ps. 40:6-8; Isa. 53:10; Ps. 69:31). Angels cannot die so cannot be sacrificed. Though sinless, they could never satisfy God’s righteousness for the redemption of men because they could never represent man (Heb. 2:9; 10:14-17). Finally, the death of a mere man would in itself demonstrate and uphold God’s law of sin and death, but resurrection could not follow, and this was envisaged by God for the Saviour of    men.

The sacrifice of Christ brings before us the great love of God, which was the motive that initiated His plan of redemption. It brings us also to the great love of Christ for his disciples, without which his sacrifice would not have been possible. Father and Son together, like Abraham and Isaac 2,000 years previously, walked to Calvary in an act of boundless mercy and love, to bring about reconciliation and forgiveness. The joy of the resurrection that followed was the consummation of it all, once again declaring the righteousness of God.