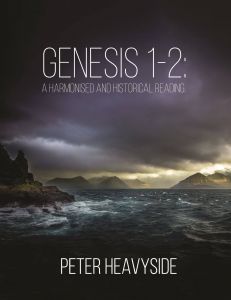 I’m pleased to announce the publication of this book. Through a close examination of the scriptural text it is a defence of the integrity of Genesis 1-2. While the book is set specifically against evolutionary creationist treatments of these chapters as dis-harmonised and non-historical, it nevertheless serves to explain why any liberal biblical critical handling of the early chapters of Genesis is faulty.
This paperback is 182 pages the price is US$10.95. It can be purchased from lulu.com via the following link:
http://www.lulu.com/ascentpublications
All proceeds from this book will go to The National Association for People Abused in Childhood (https://napac.org.uk/).

We ( Christadelphianvideo.org) in no can verify the legitimacy of the charity mentioned or the means by which the charity will receive the funds, We provide  the individual .pdf that make up the publication  free for those who cannot afford to purchase the book – as is our policy

We have agreed to advertise the publication for those who wish to go ahead and purchase the book, but accept no responsibility for the site or any monies paid to an external source.

Christadelphianvideo.org is unfunded and managed by volunteers and will, therefore, receive no part of any payment made through the purchase of this book.

A critique of this work was presented as follows..

A recent book is being heavily promoted by The Lampstand Magazine and others as treatise against Evolutionary Creationism. The book “Genesis 1-2: A Harmonised and Historical Reading” was written by bro Peter Heavyside. Proceeds from sale are going to a charity which is a good thing.  The book contends there is no break between Gen 1 & 2. His scriptural case is good on the surface but not very strong.

Bro Peter acknowledges the importance of getting the right interpretation, saying among other things:

We thoroughly agree. Too many literalists fail to distinguish between God’s meaning and their interpretation or understanding. Bro Heavyside wants any response to his book to focus on the exposition. While he acknowledges the difficulties which genetic research now present to literalists, he states science of any kind is not sufficient evidence for any conclusions. In the book he says:

any rebuttal of the conclusions in this book must turn on demonstrating the interpretation of scripture presented in it is mistaken.[2]

This is a typical literalist approach. They wouldn’t argue biology based on the Bible, despite emphatic and incorrect statements about the function of the heart and kidneys. On one hand they accept modern medical science over clear Biblical statements but then reject other science. However, let’s ignore this inconsistency for the moment and look at the arguments presented.

We are told Jesus’ use of Genesis 1 & 2 definitively proves the two chapters are historical and about the same event.

The making of male and female (Gen. 1:27) and the pronouncement about a man leaving his parents and holding fast to his wife (Gen. 2:24) both occurred at a time Jesus calls “the beginning”.

It follows from this that, in Jesus’ reading, Genesis1:27 and 2:24 took place during the same timeframe and, in this respect, they share a harmonised chronology. [3]

Does it though? What does Jesus actually say?

But from the beginning of creation, ‘God made them male and female.’ 7 ‘Therefore a man shall leave his father and mother and hold fast to his wife, 8 and the two shall become one flesh Mark 10:6-7

he who created them from the beginning made them male and female, 5 and said, ‘Therefore a man shall leave his father and his mother and hold fast to his wife, and the two shall become one flesh’? Matt 19:4-5

It is an assumption that the events described are one and the same. Jesus doesn’t say anything which explicitly ties the timing together. He doesn’t say ‘also in the beginning’, or ‘at the same time’ or ‘it was then that God said’. The argument is reading in words and meaning to what Jesus says.

Bro Heavyside also fails to account for how composite quotes work in the Bible.  Elsewhere in Mark 1:2 for example a quote is identified as being from Isaiah when it actually parses together Isa 40, Mal 3 and possibly Exod 23. Acts 13:22 combines a passage about David before his selection, after the promises and another about Cyrus and applies it all to David’s selection. These two examples alone demonstrate Bro Heavyside’s assumptions are incorrect. Composite quotations work on thematic linkages not the same event being described.

We are then told that, based on Jesus attributing the quotation from Gen2:24 to God, it must be that Adam said this prophetically. We are told to bear this in mind because we shall see the:

significance of these findings as we progress[4]

Bro Heavyside invited us to test his exposition as a test of the validity of his position. Ok. Here is what Gen 2:23-25 says:

23 Then the man said, “This at last is bone of my bones and flesh of my flesh; this one shall be called Woman, for out of Man this one was taken.” 24 Therefore a man leaves his father and his mother and clings to his wife, and they become one flesh. 25 And the man and his wife were both naked, and were not ashamed.

It is obvious that v25 is not Adam speaking but the narrator. Who is speaking in v24? It could be the narrator or Adam. Bro Heavyside wants us to think it is Adam speaking under inspiration. Is it? There is no Biblical evidence which says so. In fact the textual evidence points the other way. The expression “Therefore” is our clue and why commentators apart from this book attribute v24 to the narrator. The Hebrew term is standard language used in Genesis to explain history, names and customs[5] & [6]. See a few examples of this in Gen 10:19 11:9. 16:14. 19:22 21:31 25:30 26:33 29:34,34 30:6 32:33 47:22. It is usually clear that the inspired narrator (hence “God saying”) is adding the comment rather than the protagonists of the relevant episodes. Bro Heavyside misses this point.

Another weakness becomes evident as he states:

Bro Heavyside claims Jesus was adding to the comment of the inspired narrator in Genesis 2. Genesis 2 tells us husband and wife should cling together because God made Eve from Adam, NOT because God made two genders. Bro Heavyside acknowledges the difference and claims Jesus adds to Genesis, providing another reason for a man to cling to his wife. But was Jesus adding to the understanding of Genesis? Jesus was addressing the antagonistic Pharisees using agreed, established Scriptures to answer a disputed point about divorce. Jesus uses both statements to decry divorce, not add to what Genesis says. He is not explaining why a husband and wife cling to each other but rather that divorce, while legislated for in the Mosaic code, was not God’s plan. Jesus simply segues from one proof text to another; we should not read more into it than the obvious context of Jesus’ exposition of the divine idle as it related to marriage.

Bro Heavyside emphasises that Jesus spoke of specific details in Genesis 1 and 2 and therefore we are bound to understand both chapters as historical. Because Jesus spoke of something as historical must we read it thus? Or could Jesus use idiom or the misunderstandings of the day? Bro Heavyside states Jesus interpretation works because Jesus accepted Genesis 1 and 2 as historical. This according to the author should be the final word in determining our understanding. However Jesus freely spoke of demons and is never recorded as correcting this medical and theological misunderstanding for the benefit of his first audience. Secondly Jesus echoes the Old Testament pattern of using the heart as the origin of evil thought – a pattern which starts in Genesis 6. He unambiguously identified the heart as the source of defiling immorality and violence in Mark 7:20. Bro Heavyside omits to present a unified framework in which Jesus can make biologically incorrect remarks and yet be historically accurate about another aspect of God’s creation.

The author invites us to test his propositions against Scripture. Well enough. In his first argument he:

Bro Heavyside would have us think the headline knock-out blow for EC is that that:

He invited us to test his argument against Scripture. When this is done, we see his position is reading doesn’t stack up well. Bro Peter believes the citation of Jesus is a knock-out blow, but it simply is not so.

A reply from Brother Peter of this critique is detailed here…