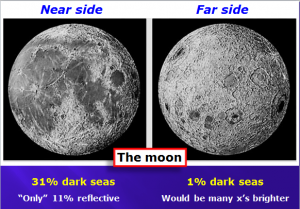 The Moon (Latin: Luna) is Earth‘s only natural satellite. It is one of the largest natural satellites in the Solar System, and, among planetary satellites, the largest relative to the size of the planet it orbits. [There is a footnote saying this last point is valid if Pluto is now reckoned as a dwarf planet.] Wikipedia 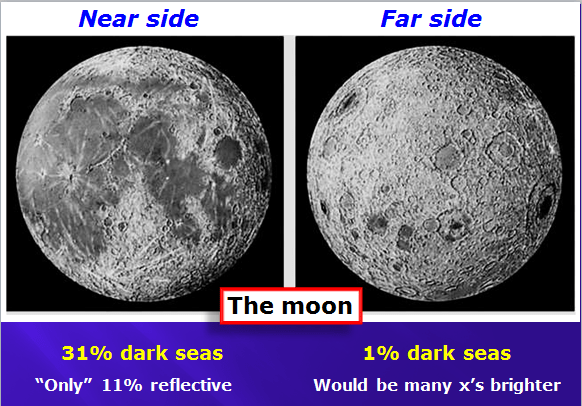 Because of the peculiar surface of the moon, “the lunar soil of silicon dioxide glass, has a texture resembling snow” (Wikipedia), it acts as a reflector of light. The moon is unusual as we only see the one side of it because it is locked into synchronous rotation.  It rotates on its own axis once in the month, so we only see the same face. Space travel has enabled us to photograph the other side of the moon. It is quite different, having only 1% dark seas compared with the 31% of what we can see. This affects the amount of light that it reflects. “Our” side is only about 11% reflective. If, beyond the Millennium, the centre of gravity – which is already slightly off-centre – where to be moved so the other side faced the earth, then night, although not as bright as day would be many times brighter than it is now.

Think of the spiritual lessons God was building in to His creation. Like the moon, we have to reflect in our lives the fact that there is a God and his Son the Lord Jesus is absent.  Although we can’t see our Master, the reality of his life and work and promised return have to be reflected in the way we conduct ourselves. People do watch us. When they ask the reason why we are different (we are aren’t we?) then we can be a witness to the wonderful hidden light that shines in our lives.

Then consider the importance of the moon to life for man on the earth. As well as being our monthly clock, and our night-time illumination, the moon controls the tides. These help keep the riverbeds scoured and take the rubbish out to sea as well supplying nutrients to the coastal sea life. The strength of the moon’s gravitation pull depends on the size of the moon and its distance from the earth. Needless to say the combination of these two elements is “just right”. If it were a bit nearer or a bit bigger we would have much less land area available and fewer usable ports as the tides would come in further and go out more. Again if the moon were just a bit smaller or further away the tides would be ineffective.

The moon is moving away from the earth. That movement is small, some 4cm/1.5inches a year and is caused by the friction of the tides. Over 6,000 years – if the movement rate hasn’t changed – then the moon is some 230metres/750ft further away, an insignificant amount, but a problem to the evolutionists whose “prevailing hypothesis today is that the Earth–Moon system formed as a result of a giant impact, where a Mars-sized body (named Theia) collided with the newly formed proto-Earth, blasting material into orbit around it that accreted to form the Moon.” (Wikipedia). One problem is that the moon is only about 384,000km away – a receding distance travelled (at present rates) in under 1.7bn years. But more relevant there would have been huge tidal waves preventing any chance of life on earth until much more recent times. No! It makes sense that God set them in their orbits.