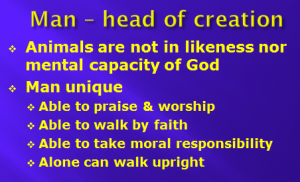 And God said, Let us make man in our image, after our likeness: and let them have dominion over the fish of the sea, and over the fowl of the air, and over the cattle, and over all the earth, and over every creeping thing that creepeth upon the earth.

And God blessed them, and God said unto them, Be fruitful, and multiply, and replenish the earth, and subdue it: and have dominion over the fish of the sea, and over the fowl of the air, and over every living thing that moveth upon the earth.1:26-28

Man is unique. He is upright, has the biggest brain in relation to body weight, can praise and worship, can rationalise, has moral feelings and being in the image and likeness of the Elohim rep  resented the chief of God’s creation. All the rest was for the background and environment for man to grow and develop. To show his faith in God – or not. Many billions have lived and died and out of these a comparatively small number have striven to bend their wills to doing God’s Will and to bring Him honour and glory. What a merciful God the pages of His Word reveal. What a glorious destiny awaits for those accounted worth to attain to the Age of the Kingdom and the Ages beyond. 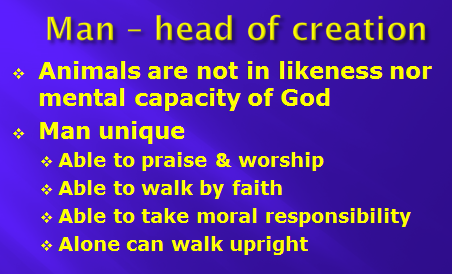 So what is meant by image and likeness? In our image is one word in Hebrew. The image part of the word from tselem. Image, likeness, resemblance [BDBG] it is a copy of the original. When Nebuchadnezzar had his dream Daniel spoke to him of the image that he had seen in his dream; it had the resemblance to a man. In our likeness. Again a compound word in the Hebrew, from dmûţ. Likeness, similitude [BDBG],capacity [Jn Thomas]. Very closely related words which are used in Gen. 5:1,2

In the day that God created man, in the likeness of God made he him; …

And Adam lived an hundred and thirty years, and begat a son in his ownlikeness, after his image; and called his name Seth: Gen. 5:1,3

Seth took after his father’s appearance and mental capacities, so man was in the image, shape, and likeness, mental capacity as the Elohim. Male and female made he them. We know from the Lord Jesus that God was His Father. As Jesus explained to Philip, “he that hath seen me hath seen the Father”. He has created the angels after the same image. The Father’s ultimate purpose is revealed at the end of the Bible.

And when all things shall be subdued unto him, then shall the Son also himself be subject unto him that put all things under him, that God may be all in all. 1 Cor. 15:28

The details of the creation of Adam uniquely by moulding Adam from the dust of the earth and the subsequent creation of Eve from the side of Adam lie outside the scope of this article.