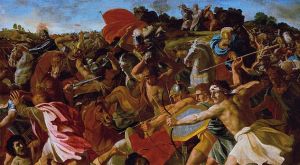 Many people who are rightly appalled at genocide practiced by men like Hitler, Pol Pot and Stalin have applied the same standard to God . In the Bible, the destruction or genocide of wicked nations is clearly taught, sometimes God did this (Assyria and Babylon) and on other times he required his people Israel to undertake it.

Answer
• God who created mankind can do as He wishes with the earth and man.Romans 9:20-23
• Man has no right to question God’s decisions. Dan2:34-35
• God generally says we are not to kill, or even hate, but he did order Israel to exterminate certain nations completely.
• When God took the Jews out of Egypt to make them his chosen nation, he gave them the land of Canaan.This involved removing the Canaanite peoples who lived there.Gen 15:14-21
• The reason for this genocide was their totally debased and evil practices of religion, involving gross immorality, worship of genitalia and the sacrificing of children to idols.
• These practices and false gods were so entrenched in the minds of these nations that to leave any of them alive would be highly dangerous to the Jews who would now take over and live in their land. Deut 7:1-6
• The failure of Israel to accomplish this extermination had just that result, with Canaanite religions overtaking many of the Jewish people.
• The Amalekites were a cruel and deceitful race that God specifically hated and wanted destroyed. Exod 17:14-16, 1Sam 15:1-3

So while modern humanistic thinking will very likely reject a God that orders genocide, that will not change God and His purpose.