Daily Readings and Thought for August 6th. “THE ANGER OF THE LORD” 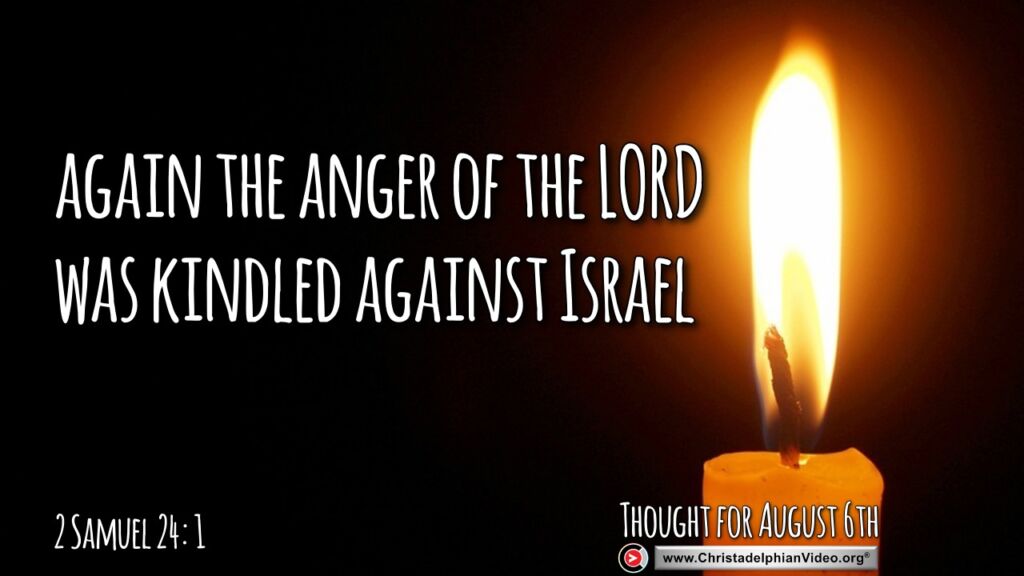 The final chapter in 2 Samuel begins by telling us “again the anger of the LORD was kindled against Israel.”  We are not told why God was angry with his people, there is no indication that it was comparable with his anger in the days of Jeremiah when the final result was that the Temple and the city was destroyed.   We are given several accounts of how badly the people were behaving in Jeremiah’s time.

We conclude that it was the outcome of so many people being ready to rally around Absalom and being ready to go to war against David and his faithful men. These did not appreciate the conquests and success of David in totally subduing the Philistines and other nations.

We ponder the verse which goes on to say that the LORD “incited David against them, saying, Go, number Israel and Judah.”   When Joab has reluctantly carried David’s  request and has completed the numbering of “valiant men who draw the sword” [v.9] we read, “But David’s heart struck him after he had numbered the people. And David said to the LORD, ‘I have sinned greatly in what I have done … I have acted very foolishly” [v.10]  David knew from past experience that the LORD “can save by many or by few” [1 Sam 14:6] as his dear friend Jonathan had said and experienced.  It is better by few, then it is more evident that victory has not been achieved by man’s own strength.

Our conclusion of the meaning behind the phrase that the LORD “incited David” is that it means the Lord allowed David to follow his own foolish desires.  There is a Proverb which says, “The heart of man plans his way, but the LORD establishes his steps” [16 v.9] and another, “The king’s heart is a stream of water in the hand of the LORD; he turns it wherever he will.” [21 v.1]

In this case, it served the LORD’s purpose to allow David to follow his desires.  The result taught David a lesson and at the same time resulted in the deserved punishment of the people.

In that sense God became a “satan” as the parallel account in 1 Chron. 21 v.1 tells us.  This should not surprise us too much as the first occurrence of the Hebrew word ‘satan’ in the Bible describes the action of an angel from God in being an adversary to Balaam [Numbers 22 v.22] Indeed the Hebrew word Satan (satanas) is many times translated as adversary in the Old Testament and names those who are adversaries, for example, satans to Solomon, at the end of his reign. (1 Kings 11 v.14, 23, 25)

In the same sense Peter became a satan, that is, an adversary to Jesus, as we will read shortly in Mark 8 v33.  Let us not become a satan!  Let us know and do the will of our Heavenly Father as much as we can so that “the anger of the LORD” is not kindled against us as it will be, against so many, as Jesus returns.

More 1 of 20 “THE LORD … WILL PROTECT THEM” Thoughts from today’s Bible readings Dec. 24th

“BUT WHERE SHALL WISDOM BE FOUND?” Thoughts from today’s Bible readings – Dec. 21st

‘I HAVE TREASURED THE WORDS OF HIS MOUTH” Thoughts from today’s Bible readings – Dec. 19th