On the Brink of War in the Middle East! 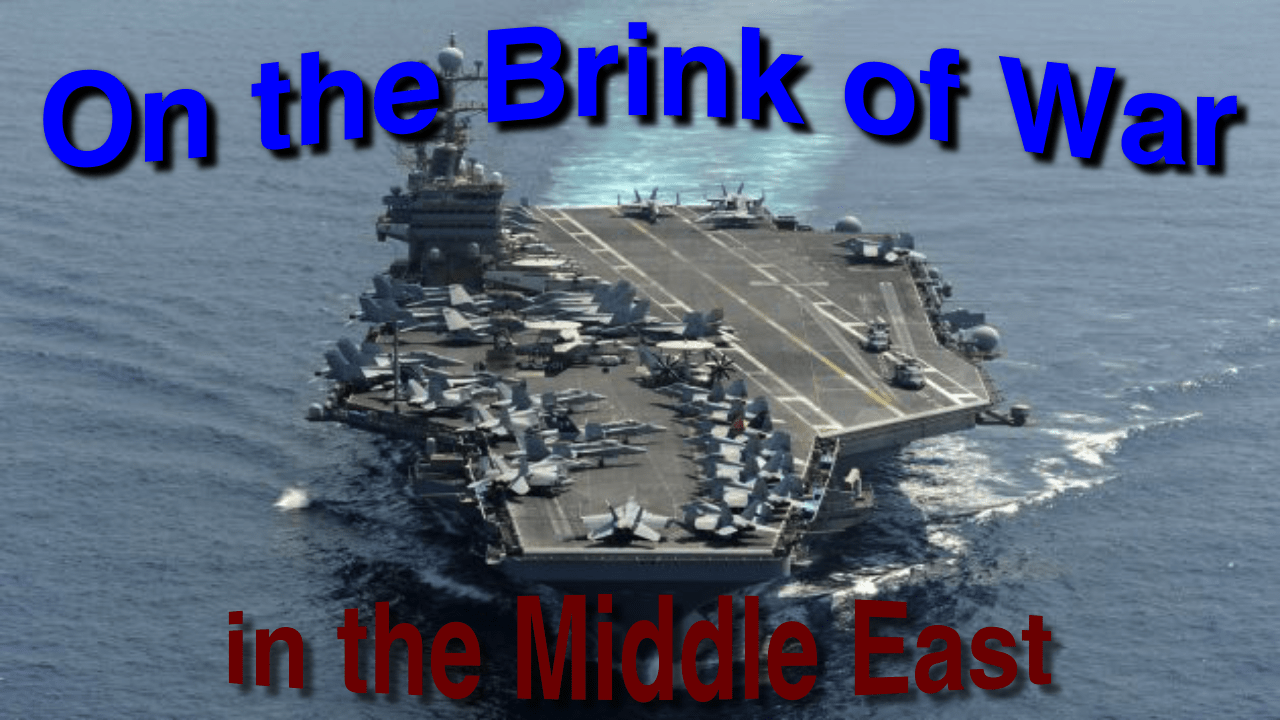 On the Brink of War in the Middle East
Just as the Hebrew Prophets Foretold. 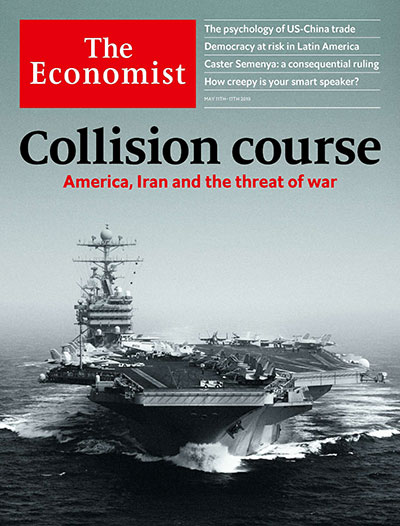 Economist: Collision course. America, Iran and the threat of war.

“The Trump administration on Friday invoked a rarely used provision in federal law to bypass congressional review of arms sales to Saudi Arabia, citing threats the kingdom faces from Iran.

“Secretary of State Mike Pompeo notified Congress of the decision to use an emergency loophole in the Arms Export Control Act to move ahead with sales of $7 billion in precision guided munitions, other bombs and ammunition and aircraft maintenance support to Saudi Arabia, along with the United Arab Emirates and Jordan, without lawmakers’ approval.”

“The US will send hundreds of additional troops and a dozen fighter jets to the Middle East in the coming weeks to counter what the Pentagon has said is an escalating campaign by Iran to plan attacks against the US and its interests in the region.

“And for the first time, Pentagon officials on Friday publicly blamed Iran and its proxies for recent tanker bombings near United Arab Emirates and a rocket attack in Iraq.

“Donald Trump told reporters Friday that the 1,500 troops would have a “mostly protective” role as part of a build-up that began this month in response to what the US said was a threat from Iran.

“The announcement caps three weeks of elevated tensions with Iran, as the administration hurled accusations of an imminent attack and abruptly deployed navy warships to the region. The moves alarmed members of Congress, who demanded proof and details, amid fears the US was lurching toward open conflict.”

The May 11, Economist Cover read, “Collision course”, “America, Iran and the threat of war”.

On May 19, Trump engaged in some Twitter diplomacy tweeting, “If Iran want to fight, that will be the end of Iran.”

There is much concern and no question that the United States and Iran are on the brink of war. A war that would involve no doubt not only the United States and Iran, but also Iranian proxies such as Hezbollah and on the other side the Gulf States and Israel. Iran has the backing of Russia and the sympathies of Europe. Considering these facts, the reverberations of such a war would be felt around the world.

An interesting opinion piece and analysis by Melanie Phillips in the Jerusalem Post entitled, “How are our new best friends in Saudi Arabia doing these days?”, commented on the shift in Saudi Arabia concerning Israel, the Jewish people and antisemitism. The following is an extract.

“It’s well known by now that the Saudis have developed ties with Israel as a result of the kingdom’s deep concerns over the menace of Iran. So the great question is whether the Saudi thaw toward Israel goes any deeper than a tactical alliance against a common foe.

“Some of what is now being said in the kingdom, necessarily with the tacit consent of its regime, goes further than might be expected from merely tactical considerations.

“During the most recent rocket onslaught from Gaza, several prominent Saudi journalists and intellectuals expressed support for Israel that went beyond merely blaming Turkey and Iran for being behind the attacks.

“The former director of the Middle East Center for Strategic and Legal Studies in Jeddah, Abd Al-Hamid Al-Hakim, wrote: “Our hearts are with you. May Allah protect Israel and its people… We will not let the treacherous hand of Iran and its agents in Gaza reach the Israeli people.

““It’s time to say this out loud: confronting the terror of Hamas is the responsibility of all the countries in the region and of the international community, not only of Israel… I say to the Arabs: Do you want these murderers and agents of Iran to rule Jerusalem?!”

“GIVEN THE virulent omnipresence of antisemitism in the Muslim world, the acid test of Saudi reformism must be, of course, attitudes not just to Israel but to the Jews. And here again, some astonishing developments are occurring.

“The head of the Jeddah-based World Muslim League, Mohammed al-Issa, a cleric and former justice minister, has condemned Holocaust denial and promised to visit Auschwitz. He also told Muslim minority communities abroad to “embrace the nations they live in,” strictly obey national laws and positively integrate into society.

“In a further sign of thawing relations, Saudi Arabia will now permit Israeli Arabs to work there freely. And yet, it will still bar Israeli Jews from doing so.”

The piece finishes by saying, “Saudi reform is moving at a glacial pace. With a population and culture as steeped as it is in Islamist fundamentalism and antisemitism, to move too fast would produce a violent backlash. … But the tectonic plates in Saudi Arabia are inching in a direction that until very recently would have been thought utterly impossible. And that shouldn’t be dismissed as no big deal. It is.”

While on a natural level these things may have seemed “utterly impossible”, through the lens of Bible Prophecy these things were possible and expected! To understand how improbable this seemed, it may be helpful to go back to the time when Israel had signed a peace agreement with Egypt in 1978. In the 1979 Milestones, Bro. Graham Pearce commented on Saudi Arabia on page 41.

“It has been an uneasy situation this year with the U.S. seeking to be friends, both with Egypt and Israel, and also with Saudi Arabia. Understandably, Saudi Arabia, guardian of Moslem shrines in Jerusalem, etc., denounced the Peace Treaty and withdrew her aid to Egypt. Egypt verbally attacked Saudi Arabia for obstructing peace. So there has been some considerable tension between the U.S. and Saudi Arabia. It is out of the question that Saudi Arabia should forsake the U.S. for Russia, but it has not been willing to welcome the U.S. more firmly on her soil.”

In the 1980 Milestones, the Saudi call for Holy War against Israel is considered. In those days it absolutely seemed “utterly impossible”, that the scene today would be possible, where we see Israel and Saudi relations warming. Both Israel, Saudi Arabia, the USA and other Gulf states have a common and dangerous enemy in Iran, while at the same time a huge potential for business and trade.

The idea of two hostile powers to the north and south of Israel at the time of the return of Jesus Christ to the earth, is clear from scripture. This can be demonstrated from three separate prophecies. 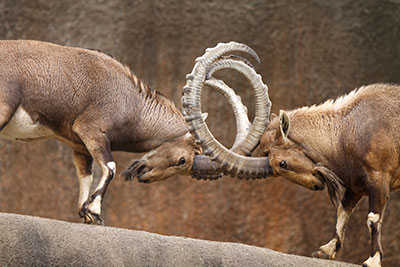 The word translated “push” is a verb that has to do with pushing  or goring of horned animals. The verb is in the reflexive form here and means, “he engaged in thrusting, fought, wrestled; he contended, argued”, according to A comprehensive etymological dictionary of the Hebrew Language for Readers of English. The words “at him” are better translated “with him”. Green’s literal translation says, “shall engage in butting with him”. The ASV says, “contend with him”. JPS and the Israel Bible, translate it, “will lock horns with him”. The meaning conveyed by these words, is not so much a single push as the KJV tends to read, but a contending with, butting with, a thrusting back and forth as one would see with two horned animals. The full sense of the verse is that at the time of the end there would be two hostile powers, one to the north of Israel and one to the south, the southern power would engage in butting with the northern power.

The second prophecy is in Zechariah chapter 6. Zechariah prophesied after Daniel and the readers of Zechariah would be familiar with the prophecy of the King of the North and the King of the South. Here there are four chariots interpreted as the “four spirits of the heavens” which accomplish God’s purpose in the earth. The later part of the chapter is a messianic prophecy of the Lord Jesus Christ, the branch who will build the temple and rule upon his throne as a king and priest. The four chariots cut between two mountains of brass. In Daniel 2, brass was a symbol of the Greek power. Here then there is a clear affirmation of two hostile powers at the time of the end when the throne is established in Jerusalem. The chariots or cherubim of God cut between them and go forth to accomplish God’s purpose in the earth.

Finally there is the prophecy of Ezekiel 38, again two hostile powers, Gog to the north and his host, including Persia or Iran and the merchant, trading powers of Tarshish with Sheba and Dedan — the ancient Gulf States. The “son of man” representative of the Lord Jesus Christ, sets his face against Gog and he is destroyed on the mountains of Israel.

This prophetical picture is gradually coming into clearer focus. The Arab world is divided to the brink of war between the north and south. Russia and the EU sympathetic and supporting Iran, the United States supporting Saudi Arabia and the Gulf States. Summarizing the Middle East in the 1977 Milestones, Graham Pearce wrote, “When we survey what is happening in this vast South region — Saudi Arabia, Jordan, Oman, Persia, Ethiopia, Egypt, Libya — we see countries brought to life again after long centuries of silence, now activated into modern style States and moving into their right positions for the great day of Christ’s return. How thrilling is ‘prophecy fulfilling.’ What would our brethren of a century ago think if they could see the things we see!”

What would Graham Pearce think if he could see the Middle East coming so exactly to the situation revealed by the Hebrew prophets so long ago and heralding the return of the Lord Jesus Christ, to sit on David’s throne in Jerusalem. May that day soon come. This has been David Billington with you. Come back next week God willing, for another consideration of the Bible in the News at www.bibleinthenews.com