Daily Readings & Thought for May 28th. “YET I WHOLLY FOLLOWED THE LORD” 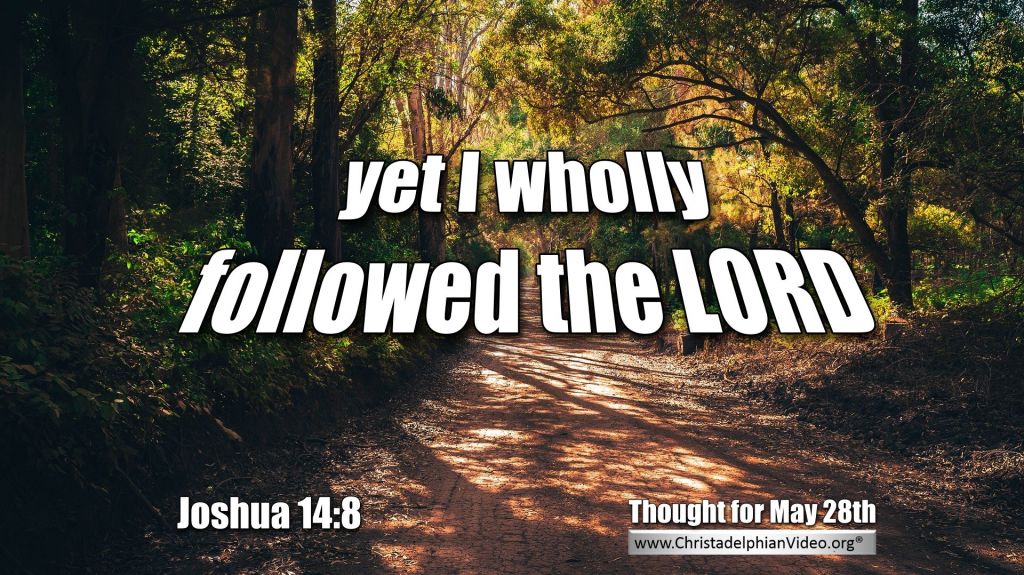 In Joshua ch. 14 today we read of the blessings received by a man who “wholly followed the LORD.”  Caleb was the other man, who with Joshua, spied out the land and brought back an optimistic report; this was after the people had miraculously escaped from Egypt, been fed in the wilderness, built the tabernacle and received the law. Surely the whole nation had evidence on which to base their faith – and today, God’s book is available for all to read and provides much evidence to build up our faith.

Caleb is now aged 85 and seeks his promised reward. We read his testimony to Joshua of the time “when Moses … sent me … to spy out the land, and I brought him word again as it was in my heart” [v.7] His was a good positive report, spoken in faith.  Sadly, he adds, “my brothers who went up with me made the heart of the people melt; yet I wholly followed the LORD” [v.8]

A prophecy about Egypt features in our Isaiah chapter 19 – and today the Coptic Christians in their midst are an unhappy and somewhat persecuted minority. Verse 17 came remarkably true after Israel was re-established in 1947/48.  We read, “In that day the Egyptians will be like women and tremble with fear before the hand that the LORD of hosts shakes over them.  The land of Judah will become a terror to the Egyptians …” [v.16,17]  This never happened in history – until then!

But then Isaiah is caused to look further into the future to the time when “the LORD will make himself known to the Egyptians, and the Egyptians will know the LORD in that day and worship …” [v.21]  In that day all the world will become dramatically aware there is a Creator – and a divine law to be obeyed (see Isaiah 2 v.2,3)