Daily Readings & Thought for November 5th. “THE TIMES OF IGNORANCE” 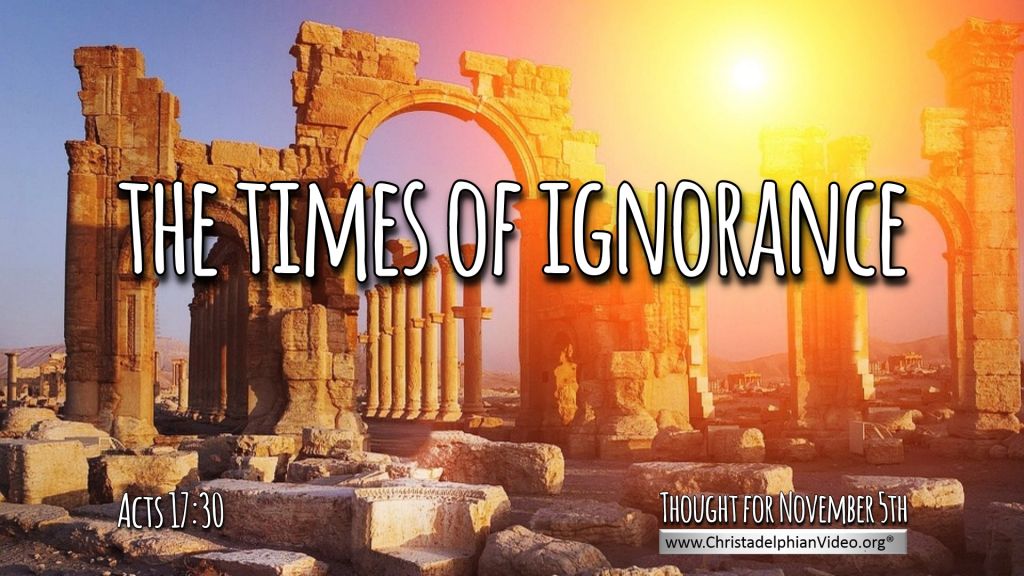 Some people, and today it seems many people, prefer to remain ignorant of what matters most – that is, ignorant of the meaning of life, of its’ cause and destiny: they live for the day, the month, and at most the next year or two.  We read today of the challenge that resulted when Paul explores the way of life and attitudes in Athens: the people worshipped many gods, all of them the result of human imagination.

He challengingly told them about the one real God who was “unknown” to them.  He proclaimed to them, “ The God who made the world and everything in it, being Lord of heaven and earth, does not live in temples made by man,  nor is he served by human hands, as though he needed anything, since he himself gives to all mankind life and breath and everything.   And he made from one man every nation of mankind to live on all the face of the earth, having determined allotted periods and the boundaries of their dwelling place,  that they should seek God, and perhaps feel their way toward him and find him.” [Acts 17 v.23-27]

Getting to KNOW the one and only real God is a process; in the ultimate, it is a lifelong process!  It is not to be compared to going to a college or University to learn the things needed for a career.

We must realize that being intellectually aware of God is only a foundation!  “Knowing” God is an experience developed in the way we live our lives in serving him.

So Paul challenged the people of Athens – and the original gospel has challenged the world ever since!  The people of Athens failed the challenge, no ecclesia was formed there. The world is failing the challenge today, especially those parts which see themselves as ‘educated’ and knowing all the answers; it is “the times of ignorance” [v.30] all over again. Paul told them “God overlooked this ignorance, but now he commands all people everywhere to repent.” [v.30]  We all need to be fully conscious in our minds that, as Paul told the Athenians, God “has fixed a day on which he will judge the world in righteousness by a man whom he has appointed” [v.31]  It is becoming clear that that “day” is getting very close. Are you ready for it? How well do you and I “know” God?