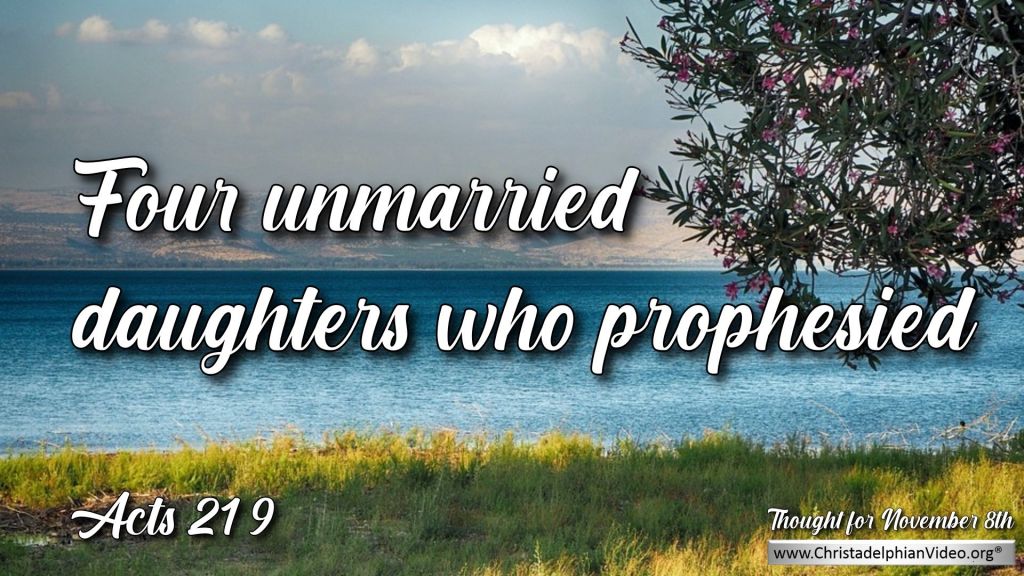 Our reading in Acts today is about Paul and his journey back to Jerusalem and the events there. Luke, who was with him, records that when they “came to Caesarea … we entered the house of Philip the evangelist, who was one of the seven (see Acts 6 v.3) and stayed with him. He had four unmarried daughters who prophesied” [Ch. 21 v.8,9]

This is one of the few verses which are sometimes appealed to as they appear to show to the minds of some that the Lord gives women an equal speaking role to men in serving him.  To say they ‘prophesied’ does not mean they predicted the future.  In the verses which follow we see that “a prophet named Agabus came down from Judea” [v.10] and he did that.

In 1 Cor. 14, reading from v.26 we see a list of the different activities that take place when “believers come together.”  These include “a lesson, a revelation, a tongue, or an interpretation.  Let all things be done for building up” [v.26]. Paul adds, “Let two or three prophets speak, and let the others weigh what is said’ [v.29], they are to “prophecy one by one, so that all may learn.” [v.31] Learn what?  It is clear that this is not prophesying in the sense of predicting the future, but of forth-telling the will of God.  The Old Testament prophets spent far more of their time addressing the spiritual issues and failures surrounding them as our present readings in Hosea illustrate.

To the Romans Paul wrote, “For whatever was written in former days was written for our instruction that … through the encouragement of the Scriptures we might have hope.” [15 v.4]  So looking at prophets such as Hosea would be a source of instruction. Now in the next verses in 1 Cor. 14 Paul makes the point, “As in all the churches of the saints, the women should keep silent … they are not permitted to speak” [v.33,34]

Now Phillip, as an evangelist would almost certainly have access to “the scriptures … written in former days”.  Such scriptures would be scarce since they were all hand copied onto valuable vellum. It seems most probable that his daughters would also see and keenly read them. So we conclude, when they “prophesied” these Scriptures were the inspiration and source of much of what they said – but this would not be when the believers came together in worship.

We live in a world full of competition between individuals, but the life of believers should be one of teamwork; this was illustrated in our reading in Acts 18 two days ago in the actions of a husband and wife team.  When they, “Priscilla and Aquila heard him, (Apollos) they took him and explained to him the way of God more accurately” [v.26].  The fact that Priscilla is mentioned first probably indicates she had the greater ability to do this.  In 1Peter 3 v.7, he comments that husbands and wives should pray together; it is teamwork in all situations that bring us closer to God – and how much we need that in these last days.