Daily Readings & Thought for September 12th. “DO NOT LET HEZEKIAH MAKE YOU …” 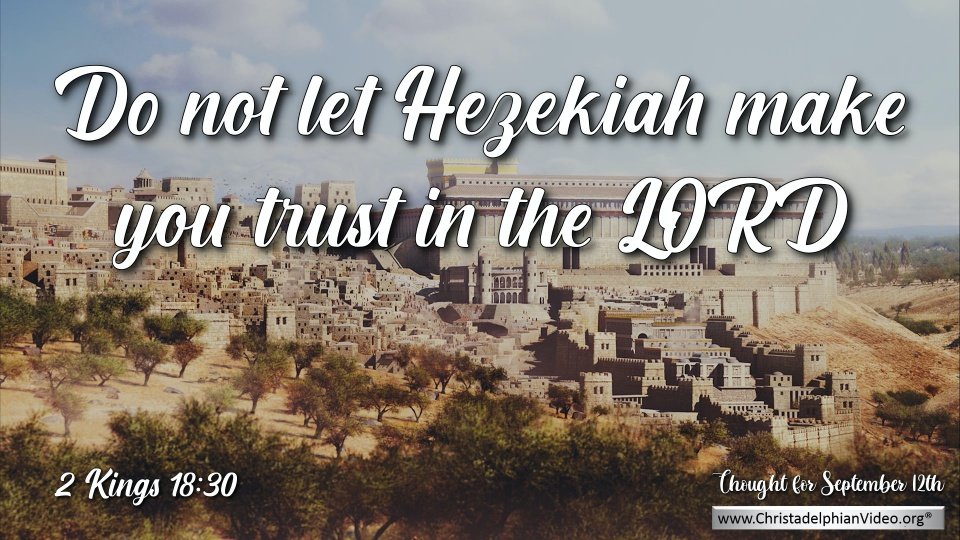 Our reading in 2 Kings (ch.18) illustrates how those who trust in God are sometimes fully tested to cause them to examine the basis of their trust.  It seems clear that deserters from among the defenders of Jerusalem had expressed their reasons for changing sides to the Assyrians.  This followed the collapse of their faith in the LORD, their faith was not like that of King Hezekiah. They saw all the physical power of the Assyrians who now surrounded the city.

Maybe they had helped them perfect their Hebrew so that the Assyrian Commander could speak in Hebrew to scoff about the weakness of YHWH, the LORD to the defenders on the walls.  The commander said ‘Do you think that mere words are a strategy and power for war?  In whom do you now trust, that you have now rebelled against me?” [v.19-20]   It is evident that the deserters had voiced their complaints – for the Commander goes on to say, “if you say to me, ‘We trust in the LORD our God’, is it not he whose high places Hezekiah has removed , saying to Judah and Jerusalem, ‘you shall worship before this altar in Jerusalem?’” [v.22]   The Temple had been built to create one place of worship but many people still preferred to go up to the high places: you can see in India many such ‘high places’ where Hindu gods are worshipped.  There is a sort of parallel today with some believers in God creating formulas of words which are not in the Bible and indeed, contradict it – like saying ‘ God is one in three persons.’

The battle of words reached its highest point when the Assyrian “called out in a loud voice in the language of Judah, ‘Hear the word of the great king, the king of Assyria! … ‘Do not let Hezekiah deceive you… Do not let Hezekiah make you trust in the LORD by saying, The LORD will surely deliver us… do not listen to Hezekiah … he misleads you ..” [v.28-32]

Today we are surrounded by those who cast doubt on the foundations of our faith and the reality of the God of the Bible – are they undermining your faith?  Tomorrow we will read of the reaction of Hezekiah – and how he strengthens his faith with the help of God’s great prophet Isaiah – a valuable lesson for us.